He bought the ring. He then got down on one knee and asked you one of life’s biggest questions.  You said yes through the tears. The story begins…

Now what? So many things flood to your mind as what to do for the big day.  You both have ideas – big ideas and can not stop talking and thinking about the fun details. The cake, the flowers, the D.J. or band, the location….and the most anticipated, and special detail, buying a wedding dress!

The most renown and respected store to visit if you are a bride-to-be is Inspirations Bridal. I love that they are an upscale and knowledgeable and even though they make me take my shoes off when I entered the store, to avoid any salt or sand being tracked in, I love that the respect their dresses so much.  They have white slippers to put on so you don’t have to walk around in your socks. I thought that was genius That is what I call great customer service! They are in North Conway, New Hampshire and the staff is respectful, patient and inspiring.

If your in the mood for a road trip, you could visit Berlin, New Hampshire and check out Betty Dee Fashions. This is another fabulous store and it is, in fact, where my wife found her wedding dress! They have been around for years and are a trusted source for everything bridal. My wife loved her experience there almost twenty years ago! She still remembers the details of the times she visited there, and that shows me how very important the bridal shop truly is in the planning experience. This got me thinking…. I wonder what the history of the wedding dress is? My research began:

A wedding dress or wedding gown is the clothing worn by a bride during a wedding ceremony. Color, style and ceremonial importance of the gown can depend on the religion and culture of the wedding participants. Most brides choose a dress of white to symbolize purity of the soul.
WESTERN CULTURE

Weddings performed during and immediately following the Middle Ages were often more than just a union between two people. They could be a union between two families, two businesses or even two countries. Many weddings were more a matter of politics than love, particularly among the nobility and the higher social classes. Brides were therefore expected to dress in a manner that cast their families in the most favorable light, for they were not representing only themselves during the ceremony. Brides from wealthy families often wore rich colors and exclusive fabrics. It was common to see them wearing bold colors and layers of furs, velvet and silk.Over the centuries, brides continued to dress in a manner befitting their social status – always in the height of fashion, with the richest, boldest materials money could buy. The poorest of brides wore their best church dress on their wedding day. The amount of material a wedding dress contained also was a reflection of the bride’s social standing and indicated the extent of the family’s wealth to wedding guests. Today, there are wedding dresses available in all price ranges, and Western traditions have loosened up to include a rainbow of colors and variety of lengths, which are now considered acceptable. Women may purchase ready-made gowns, wear a family heirloom, or they may choose to have a dressmaker create one for her. In addition, today many bridal salons have samples of wedding gowns in their stores where the bride selects a certain style and orders one to be made to fit. 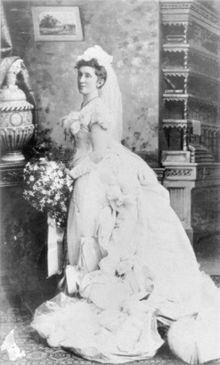 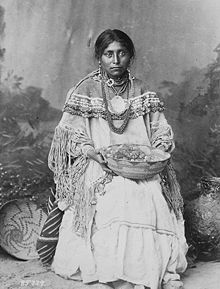 (Photos public domain. Files from the Wikimedia Commons)Photo 1: Lady Forrest 1876, Victorian style dress
Photo 2: Apache bride
Photo 3: The woman to the far right is wearing a typical wedding dress from 1929. Up until the late 1930’s, wedding dresses reflected the styles of the day. From that time onward, wedding dresses have traditionally been based on Victorian styles.Wedding dresses have traditionally been based on the popular styles of the day. For example, in the 1920s, wedding dresses were typically short in the front with a longer train in the back and were worn with cloche-style wedding veils. This tendency to follow current fashions continued until the late 1940s, when it became popular to revert to long, full-skirted designs reminiscent of the Victorian era. Although there has always been a style that dominates the bridal market for a time, and then shifts with the changes in fashion, a growing number of modern brides are not choosing to follow these trends. This is due in large part to non-traditional and non-first-time weddings, and women who are marrying later in life.Today, Western wedding dresses are usually white[1], though “wedding white” includes shades such as eggshell, ecru and ivory. […]Mary, Queen of Scots, wore a white wedding gown in 1559 when she married her first husband, Francis Dauphin of France because it was her favorite color, although white was then the color of mourning for French Queens. The first documented instance of a princess who wore a white wedding gown for a royal wedding ceremony is that of Philippa of England, who wore a tunic with a cloak in white silk bordered with grey squirrel and ermine in 1406.[3]White did not become a popular option until 1840, after the marriage of Queen Victoria to Albert of Saxe-Coburg. Victoria wore a white gown for the event to incorporate some lace she prized. The official wedding portrait photograph was widely published, and many other brides opted for white in accordance with the Queen’s choice.[4]The tradition continues today in the form of a white wedding, though prior to the Victorian era, a bride was married in any color, black being especially popular in Scandinavia.[5] Later, many people assumed that the color white was intended to symbolize virginity, though this was not the original intention. (It was the color blue that was connected to purity.) The white gown is in fact a symbolic Christening gown. It is a variation of the white surplice worn in the Western Catholic tradition by members of the clergy, church choirs and servers and the gowns worn by girls celebrating their first communion and at their confirmation and also by women making religious vows. Jews have gone to great lengths [6] to follow[7] these Western (Judeo-Christian) customs, whilst adhering to the laws of Tzniut. Today, the white dress is understood merely as the most traditional and popular choice for weddings.
NATIVE AMERICAN CULTURE

The indigenous peoples of the Americas have varying traditions related to weddings and thus wedding dresses. A Hopi bride traditionally would have her garments woven by the groom and any men in the village who wished to participate. The garments consisted of a large belt, two all-white wedding robes, a white wedding robe with red stripes at top and bottom, white buckskin leggings and moccasins, a string for tying the hair, and a reed mat in which to wrap the outfit. This outfit also would serve as a shroud, since these garments would be necessary for the trip through the underworld.
A Pueblo bride wore a cotton garment tied above the right shoulder, secured with a belt around the waist.
In the traditions of the Delaware, a bride would wear a knee-length skirt of deerskin and a band of wampum beads around her forehead. Except for fine beads or shell necklaces, the body would be bare from the waist up. If it were a winter wedding, she would wear deerskin leggings and moccasins and a robe of turkey feathers. Her face would be painted with white, red and yellow clay.
The tribes of Northern California (which include the Klamath, the Modoc and the Yurok) had a traditional bridal dress woven in symbolic colors: white for the east, blue for the south, yellow (orange) for the west; and black for the north. Turquoise and silver jewelry were worn by both the bride and the groom in addition to a silver concho belt. Jewelry was considered a shield against evils including hunger, poverty and bad luck.EASTERN CULTUREMany wedding dresses in China, India (wedding sari) and Vietnam (in the traditional form of the Ao dai) are colored red, the traditional color of good luck and auspiciousness. Nowadays, many women choose other colors besides red. In modern mainland Chinese weddings, the bride may opt for Western dresses of any color, and later on a traditional costume for the official tea ceremony.In modern Taiwanese weddings, the bride generally picks red (following Chinese tradition) or white (more Western) silk for the wedding gown material, but most will wear the red traditional garmet for their formal wedding banquets. […]Red wedding saris are the traditional garment choice for brides in Indian culture. Sari fabric is also traditionally silk. Over time, color options and fabric choices for Indian brides have expanded. Today fabrics like crepe, Georgette, charmeuse, and satin are used, and colors have been expanded to include gold, pink, orange, maroon, brown, and yellow as well.[8] Indian brides in Western countries often wear the sari at the wedding ceremony and change into traditional Indian wear afterwards (lehnga, choli, etc.).At Japanese weddings, brides will often wear three or more dresses throughout the ceremony and subsequent celebrations with a traditional kimono, white and color dress combinations are popular. White is used because in Japan it symbolizes death – in this case, the bride becomes dead to her family. The bride will eventually remove her white kimono to reveal another colored one – usually red – to symbolize her rebirth into her husband’s family.The Javanese people of Indonesia wear a kebaya, a traditional kind of blouse, along with batik.In the Philippines, variations of the Baro’t saya are considered to be wedding attire for women, along with the Barong Tagalog for men.”

(Photo: public domain, author: Sergei Ivanovich Borisov, this is a file from the Wikimedia Commons. More Information on the description page on Wikipedia.

1.      PRINT Magazine, The Bride Wore Chartreuse: Why (Most) Wedding Dresses are White by Jude Stewart
3.      The History of Matrimony
4.      “Royal Weddings 1840 – 1947: From Queen Victoria to Queen Elizabeth II” History of the Wedding Dress
5.      “Old Marriage Customs in Finland” Old Marriage Customs in Finland
6.      “The Wedding Gown That Made History”
7.      “Wedding Gowns – Jewish Wedding Info”
8.      Trends in Bridal Sari
This article uses material from the Wikipedia article Wedding dress which is released under the Creative Commons Attribution-Share-Alike License 3.0. A list of the authors you find on Wikipedia.”

Thank you so much to: https://www.marryjim.com for sharing the history of the wedding dress!

Reading the history of the wedding dress makes me want to reiterate the incredible importance of the decision:

My first choice/recommendation is hands-down Inspirations Bridal, 984 White Mountain Hwy, North Conway, NH, 03860 (603) 447-1251
In my opinion the only place to shop for a wedding dress in a locally-owned shop. In doing so, you are supporting your community and what better way to begin your family life, but to connect with your “local family.”  I would love to here your input about this. Leave a comment below to share your feelings.

Wedding dress photo from a wedding

No matter what your event may be either  wedding photography or senior portraits each day is a great day and will be handled professionally with our clients goals in mind. If you have any questions or comments for me or about our photography please call me 603-367-4657 or email me at New Hampshire Wedding Photographer today.